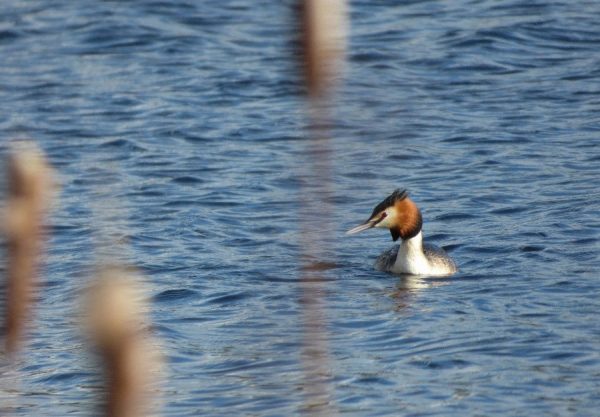 Lough Neagh supports Ireland’s largest breeding population of Great Crested Grebes. During the spring and summer months this species is unmistakable, both adults are similar in appearance with striking chestnut and black crests.

Great Crested Grebes are adapted for life on the water. Legs set far back on the body makes them strong swimmers as they dive to catch fish but this makes them very clumsy walkers on land.

This species performs a very elaborate courtship display in the spring, which sees the pair of birds “dance” together, crests puffed out into a large ruff. This behaviour strengthens the bond between the pair and is a remarkable wildlife spectacle to witness!

Great Crested Grebes construct a floating nest of reeds and other aquatic vegetation. They usually lay between 3 or 4 eggs. The chicks leave the nest not long after hatching, accompanying their parents on the water.

This species is a conservation success story. Great Crested Grebes were almost hunted to extinction in Britain in the late 19th Century. Their beautiful feathers were used decorate ladies hats and accessories. Thankfully, a group of passionate women known as the “Fur, Fin and Feather Folk” campaigned for the protection if these birds- this was the precursor to the Royal Society for the Protection of Birds (RSPB).

Great Crested Grebes are a resident species which means you can see them all year round!